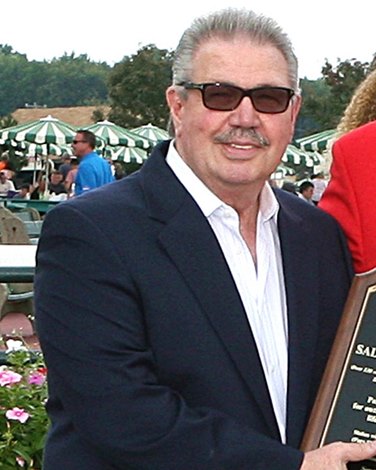 Since becoming executive director of the PTHA in Feb. 1996, Ballezzi has played an integral role in shaping Pennsylvania’s horse racing industry. He, along with PTHA president Salvatore DeBunda, were fierce advocates for passage of the Pennsylvania Race Horse Development and Gaming Act (Act 71 of 2004). The legislation legalized slot machines in the Commonwealth and set aside a percentage of the revenues to bolster racing purses and breeding incentives, as well as provide health and pension benefits to individuals in the racing industry.

Driven by the enormous respect he holds for race horses, Ballezzi championed the creation of Turning for Home in May 2008, a non-profit program that has provided more than 3,200 former Parx race horses with new homes and careers after their racing careers have ended.  The program was featured on HBO’s Real Sports with Bryant Gumbel as an alternative to slaughter and earned widespread recognition as a model program for the industry. The goal of Turning for Home has been a personal priority for Ballezzi and, after it was founded, the PTHA implemented a zero-tolerance policy toward former Parx horses being sold at slaughter auctions. “We owe it to these horses to help them find new careers and new purpose after they leave the sport of racing,” said Ballezzi.

Ballezzi’s legacy will long be remembered at Parx as well. He created the Horsemen’s Purchasing Association which provides horsemen with bedding, feed, supplements, and equipment at supply-discounted prices on the backstretch of the track. In 2000, he spearheaded the creation of The Granny Fund—named in honor of Catherine “Granny” Youmans, the mother of PTHA office manager and long-time personal secretary to Ballezzi, Connie Youmans—which provides scholarships to Parx stable employees to continue their education in college and night classes.

Following the legalization of slot machines, Ballezzi played an instrumental role in negotiations with Parx Racing management regarding increased capital investments in the backstretch that included rebuilding all of the existing barns and renovating all existing dorm rooms with heat and A/C, new wiring, and secured windows and doors. He also prioritized putting in place strong health insurance policies for eligible horsemen that include emergency room visits, hospitalization, doctor’s visits, prescription plan, vision and dental care, and life insurance.

“Mike Ballezzi has had an immense impact on Parx and Pennsylvania racing, and he has created a legacy that will benefit horsemen, backstretch workers, and our equine athletes for years to come,” said Salvatore DeBunda, president of the PTHA board of directors. “The Turning for Home Program he created showed incredible vision and a commitment to the health and well-being of our retired racehorses. Mike dedicated the past 25 years of his life to championing the interests of those who work in our industry and fighting to create a fair and level playing field for all horsemen. On behalf of the PTHA board and the horsemen at Parx, I thank Mike Ballezzi for his unwavering commitment to horsemen and his leadership in our industry.”

A graduate of Widener Law School, Ballezzi is an attorney and previously served as a District Justice in Delaware County, PA from 1983-98. He has been a licensed Thoroughbred owner since 1973, is a former trainer, and currently races under the name of Balmora Farm. He was named 2008 PTHA Man of the Year and he was inducted into the Parx Racing Hall of Fame in 2014.

Ballezzi not only served as executive director of the PTHA but also was elected nine times as owner/director of the PTHA board of directors. He also served as a member of the national THA board of directors and was recognized in 2020 by the national Thoroughbred Horsemen’s Association for outstanding service to the racing industry. He also is a member of the Parx Mortality Review Board. He was honored in 2019 by Parx when they named the M.P. Ballezzi Appreciation Mile in recognition of his service to all horsemen and women who are Parx racing.

The PTHA will be interviewing potential candidates for the executive director position over the course of the next few weeks.