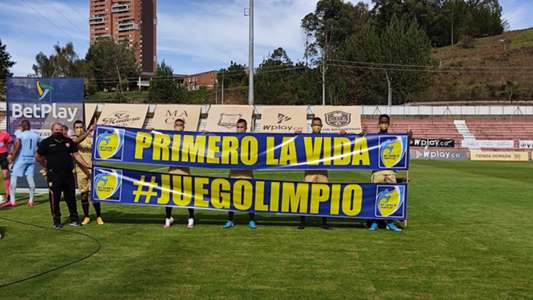 Despite their pleas to have the game postponed, the league forced the team to face Boyaca Chico down four players

Colombian top-flight side Rionegro Aguilas were forced to play Boyaca Chico with just seven players on Sunday due to injuries and Covid-19 cases within the team.

Impressively, Aguilas managed to hold their opponents scoreless for 57 minutes before ultimately conceding three times in a 3-0 defeat.

The match was suspended after Aguilas player Giovanny Martinez was injured and couldn’t continue in the 79th minute, putting his side below the minimum players required to play.

Why did the game go forward?

Aguilas petitioned the Colombian top flight, Categoria Primera A, to postpone the game after 16 of their players tested positive for Covid-19, with a further seven injured.

However, the league ordered the game to move forward, with Aguilas only able to field seven healthy players – including two goalkeepers.

In a statement posted on Twitter before the game, Aguilas said they were playing only to avoid “severe sanctions”.

Speaking to Win Sports earlier this week, league president Fernando Jaramillo said: “If there are seven players available, you have to show up with those seven players.”

What happened in the game?

Prior to the match, Aguilas announced their matchday squad on Twitter in cheeky fashion, saying: “The 18 … sorry the seven called up for the most unequal game in history.”

The seven Aguilas players posed before the match with banners that read “LIFE FIRST” and “#CLEANPLAY”.

Though they held out bravely for nearly an hour, Boyaca Chico netted on 57 minutes before quickly scoring twice more.

Following the suspension of the game, Aguilas wrote on Twitter: “We lose the game but we will win the battle against Covid-19. We are very proud of you, guys.”