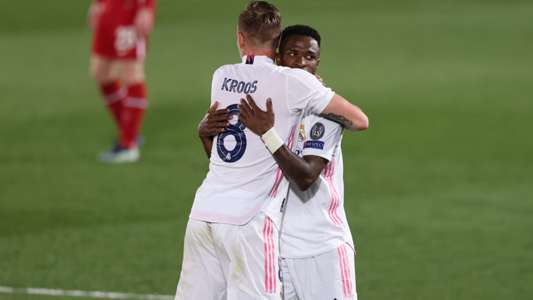 Vinicius Junior was awestruck by the midfield shift team-mate Toni Kroos put in during Real Madrid’s 3-1 win over Liverpool in the first leg of the Champions League quarter-finals.

Kroos set up the young Brazilian’s opener with a high-arcing ball over the Reds defence – an assist that led him to claim “nobody can play like” the German conductor.

There had been speculation entering the tie that Real might struggle to keep up with Liverpool in central areas due to their age, but it was instead 31-year-old Kroos and 35-year-old Luka Modric putting the visitors a step behind for most of the match.

“Toni Kroos is incredible, he is a legend,” Vinicius told RMC Sport. “Nobody can play like him. He has a lot of class.

“People from outside speak. I always keep working. I had never scored a double with this shirt, I think it’s my best moment. I pointed to the crest because I work too much. I always dreamed of playing at Real Madrid.

“I always keep working. My team-mates encourage me to do so. They give me confidence.”

Real Madrid calmed many of their biggest fears on Tuesday at a crucial point in their campaign with the attack looking as free-flowing as it has all season and a makeshift defence stepping up despite Sergio Ramos and Raphael Varane missing out.

Not only have they positioned themselves to advance the the semi-finals of the Champions League, but they also will meet Barcelona this weekend with the team’s confidence sky-high.