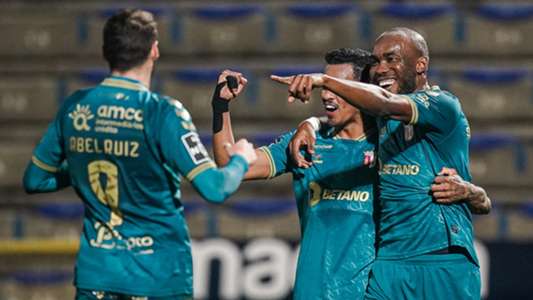 Ali Elmusrati was on target as SC Braga secured a 2-1 away victory over Farense in Monday’s Primeira Liga encounter.

Following their 2-0 home defeat to Benfica before the international break, the Archbishops went to the Estadio de Sao Luis, saw, and left with all points at stake.

Both teams adopted a cautious approach from the blast of Rui Costa’s whistle while trying to rely on counter-attacks. Although the visitors had few chances which they could not bury past the goalkeeper.

However, their moment of breakthrough came in the 29th minute as Elmusrati was in the right position to head Joao Novais’ cross past goalkeeper Beto.

That goal was an eye-opener for the hosts who fought like a wounded animal to level matter in the 34th minute through Pedro Henrique – with Ryan Gauld providing the assist.

With no goals in the remaining 11 minutes, both teams went into the half time break all squared.

In the second 45 minutes, Jorge Costa’s Farense came out blazing, albeit, they were unable to match the visitors who dominated ball possession.

While it was looking like the encounter would end in a draw, super-sub Andraz Sporar condemned the Lions of Faro to defeat with his last-gasp effort.

Libya’s Elmusrati was in action from start to finish against Farense, whereas, the hosts did not feature their Angolan duo of Djalma and Hugo Marques as well as Guinea Bissau star, Bura.

In his post-match assessment, manager Carlos Carvalhal opened up that his team profited from a ‘dose of luck’.

“We won but with a dose of luck that earned us the victory,” Carvalhal told the club website.

“Luck is sought, and we believed until the last second we could score. In the final phase of the second half, we had a hard time.

“We ended up having happiness and it was a hard blow for Farense, who did a lot to win the game.

“We also had a high-level first half and we deserved to be ahead. Our fight is to earn the points and look at the games and not the destination. We’ve been second and now we’re fourth.”

As a result of this win, Braga climbed to fourth in the Primeira Liga log having accrued 53 points from 25 outings, while Farense languish in the relegation zone with just 22 points from the same number of outings.