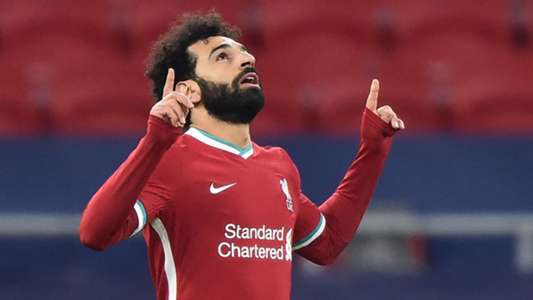 Mohamed Salah improved on his outstanding English Premier League feat against Arsenal with a goal as the Reds secured a 3-0 away win on Saturday evening.

The 28-year-old has now been involved in nine goals in nine fixtures against the Gunners, scoring seven and providing two assists.

On the back of his impressive performance during the international window, the Egypt ace was handed a place in the starting XI alongside Sadio Mane and Roberto Firmino.

His contributions proved crucial as the Reds breezed past Mikel Arteta’s side to leave the Emirates Stadium with all points at stake.

In the keenly contested affair, the opening 45 minutes – where chances were few ended on a no winner, no vanquished note.

As it proved a gratifying evening for Jurgen Klopp’s men, they took the lead in the 64th minute through substitute Diogo Jota – who profited from a cross from Trent Alexander-Arnold to head past goalkeeper Bernd Leno.

Four minutes later, Salah turned in the second goal. Fabinho chipped a ball over the hosts’ backline and the African got the ball, cut in from the right before sliding the ball under Leno from six yards.

That was his 18th goal for the Anfield side in the 2020-21 campaign – and that ensured he extended his fine run against the North Londoners.

Eight minutes from full time, Jota completed his brace to end the Gunners’ ambition of a comeback. Salah found Sadio Mane in the box, but the Portugal international arrived at the right time to smash home from 10 yards out.

With this victory, Klopp’s team extended their winning streak to three in all competitions. They occupy the fifth position in the log after accruing 49 points from 30 games.

For Arteta’s team, they sit in the ninth spot with 42 points from the same number of fixtures.

Salah would be hoping to continue with his goalscoring form when Liverpool travel to Santiago Bernabeu for Tuesday’s Champions League quarter-final first leg versus Zinedine Zidan’s Real Madrid, while Arsenal welcome Slavia Prague to the Emirates Stadium in the Europa League on Thursday night.