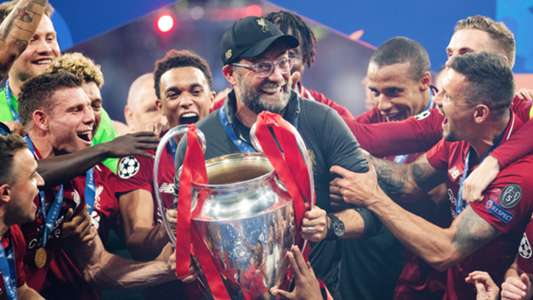 The Reds’ Premier League defence has fallen flat, but they remain in the running in Europe

A nosedive in form that began around the festive period has seen the Reds drop to eighth in the Premier League standings, effectively ending their chances of retaining the title lifted last season.

But the Merseysiders remain alive and kicking in the Champions League, a competition in which Klopp also has recent history.

“It would be a dream yeah, so why not? But we really are not in a situation thinking that. We are really happy beating Leipzig and going through to the quarter finals and in the last eight,” the German told reporters when asked about his side’s prospects in Europe.

“James Milner said to me its a fourth quarter final and five times in Europe since I was here so yeah, that’s good.

“But we are not in a situation sitting here and telling already the fairytale of how it all could end.

“What we think, what we wish, what we dream and all those kind of things is completely different but being ready for Wolves is the only concern and the only thing I am busy with and using the positives of the Leipzig game which is very helpful.

“The other seven teams will be very good. It’s not 100% who they all are yet but the few who are already in there and those who look likely they will be in, yes.

“There are no easy games but then in those games lets give them a proper game yes, that is the plan whoever it is, definitely, that’s the plan.

“But not today. It’s in three or four weeks when the next round will be played but we have enough time until then and we try to use it as good as possible.”

Liverpool currently boast six wins in the European Cup/Champions League, a tally that places them joint-third in the all-time competition ranking alongside Bayern Munich, one behind Italian giants Milan in second.

Real Madrid are the undisputed kings of the tournament, having lifted the title an incredible 13 times – including the first five editions back to back between 1955 and 1960 and four triumphs in five seasons from 2014-18.

The Reds’ most recent success came in the 2018-19 final over Tottenham, having reached the final the previous year against Madrid.

And despite their Premier League woes, Wednesday’s accomplished 2-0 last-16 victory over RB Leipzig to clinch a 4-0 aggregate win showed that on their day, Klopp’s charge must be taken seriously.