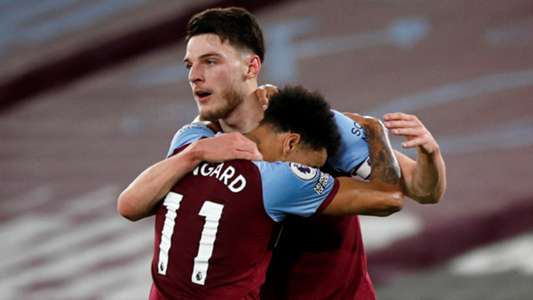 Declan Rice claims he has been studying past midfield greats Patrick Vieira and Yaya Toure in order to propel his game forward.

Rice is one of the brightest midfield prospects in the country, and is having a fine season to mirror that of his West Ham team.

He is keen to dispel the notion that he is defensive shield, and is eager to show that he can be a box-to-box performer.

“I think a lot of people see me as a simple, basic player who gets it, gives it and protects the back four,” Rice told Sky Sports following West Ham’s win over Leeds on Monday.

“I know, my team-mates know and the manager knows what I’ve got in my locker.

“I want to show that I can be exciting and I can take the ball forward. I have great athleticism.”

Arsenal legend Vieria and Manchester City great Toure are two of the finest all-round midfielders to grace the game.

Vieira was at his peak when Rice – who was born in 1999 – was an infant, but he has clearly studied the Frenchman’s game and that of Toure.

He said: “I’ve been watching the top players over the years, the Yaya Toures, the Vieiras.

“There’s a long way to go to get to that level. But the way they used to carry the ball up the pitch and drive their teams forward is something I have been trying to learn and add to my game.”

What else did Rice say?

West Ham secured victory over Leeds via goals from Jesse Lingard and Craig Dawson. The former scored a rebound after his penalty had been saved by Illan Meslier, and Rice revealed Hammers boss David Moyes told him he would be back on spot-kick duty.

“I think the gaffer has just battered me in there!” he said. “Me and Jess spoke and we’ve been practicing them in training together. He said to me: ‘Can I take it?’ and I’m not one to be selfish.

“The gaffer has just said in there it’s definitely me on the penalties again, so for the next one I will have to say: ‘Jess, look give me the ball mate!’”

The Hammers were viewed by some as relegation candidates at the start of the season, but they have silenced their critics with a brilliant campaign to date.

They are fifth in the table and should West Ham win their game in hand they would leap above Chelsea into the top four.

With 11 games remaining in the season, they have some momentum and the dream of Champions League qualification remains alive.