Osimhen in action as Napoli lose against Granada in Europa League

Osimhen in action as Napoli lose against Granada in Europa League 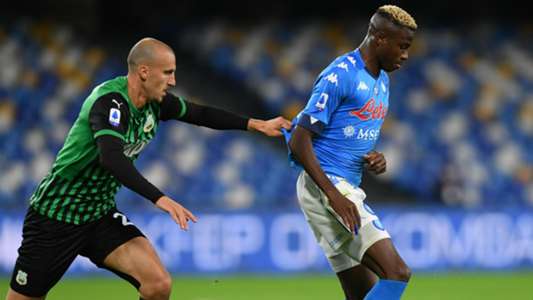 Victor Osimhen was in action as Napoli lost 2-0 against Granada in the first leg round of 32 of their Europa League game on Thursday night.

The centre-forward was handed his 10th start of the season at Estadio Nuevo Los Carmenes but did not make much impact as his side lost against the Nasrids.

The Nigeria international teamed up with the Parthenopeans last summer on a club-record fee but has been struggling to justify the huge amount paid to Lille to secure his services, having only scored two goals and provided one assist since his arrival.

The forward has battled with injury, indiscipline and coronavirus problems in the campaign which have limited his playing time.

Osimhen spearheaded Napoli attack against the Nasrids but despite his effort, Napoli were unable to continue in the winning way after defeating Juventus last time out to end a three-game winless run.

Granada hit the ground running in the encounter, opening the scoring as early as the 18th minute through Yangel Herrera.

Kenedy then scored the second goal in the 21st minute which proved to be the strike that sealed the victory in the outing.

Napoli made several efforts in the second half to try and avoid defeat but Granada were able to hold on to their lead and secure the win.

Osimhen featured for the duration of the game for Napoli in his 15th appearance this season across all competitions.

The 22-year-old will hope to make a meaningful impact in the second leg scheduled for February 25 at Stadio San Paolo.

Before the Europa League outing against Granada, Osimhen will be expected to feature when the Parthenopeans take on Atalanta on February 21.

The forward remains a key member of the Nigeria national team and will be expected to feature in the Super Eagles’ 2022 Africa Cup of Nations qualifiers against the Republic of Benin and Lesotho in March.