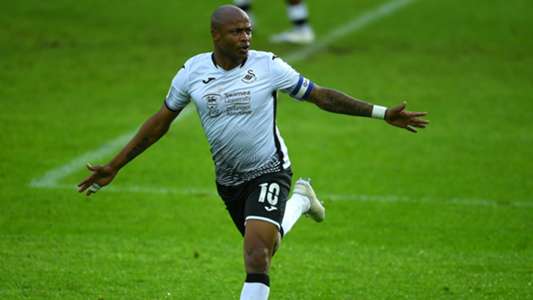 Andre Ayew was on the scoresheet to help Swansea City secure a 2-0 victory over Norwich City in Friday’s Championship game.

The 25-year-old was handed his 25th league start and made a vital contribution, inspiring the Swans to their second consecutive victory after their win over Rotherham United last time out.

The Ghana international spearheaded Swansea attack along with Jamal Lowe at Liberty Stadium and found the back of the net.

Swansea began the game impressively, dictating the pace with their ball possession and were rewarded for their impressive start when Ayew opened the scoring.

The forward put Steve Cooper’s men in front when he fired his effort past hapless goalkeeper Tim Krul in the 42nd minute after receiving a timely assist from Jake Bidwell.

Conor Hourihane then doubled the lead in the 48th minute after receiving a sumptuous assist from Jay Fulton.

The strike proved vital, as it helped Swansea City sealed the victory despite late efforts from Norwich City to try and avoid defeat.

The win ensured the Liberty Stadium outfit climbed to the second spot on the Championship table after gathering 53 points from 27 games.

Ayew featured for the duration of the game, made 39 touches on the ball and had 88 percent successful pass rate besides scoring in the encounter.

The forward has now found the back of the net eight times and provided two assists in 25 league games, amid other dazzling showings.

The Ghana captain will hope to continue his impressive form in front of goal when Swansea City take on Manchester City in a FA Cup tie on February 10.

Ayew teamed up with the Swans in January 2018 from West Ham United for his second spell with the Liberty Stadium outfit.

The forward spent time on loan with Fenerbahce in the 2018-19 season and has been delivering scintillating performances since his return to the Championship side.’

Ayew remains a key member of the Ghana national team and has featured in more than 90 games for the West African country.

The winger will be expected to lead the Black Stars in their 2022 Africa Cup of Nations qualifiers in March.