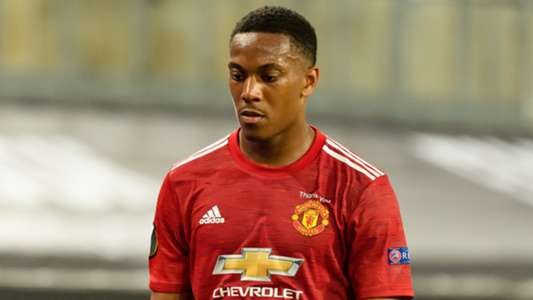 The France international only has two league goals this season, leading to suggestions Edinson Cavani should start ahead of him

The 25-year-old has been heavily criticised for his recent performances having not scored for nearly a month, and with only two Premier League goals this season. Edinson Cavani has 10 fewer league starts than Martial and twice as many league goals, leading to suggestions the Frenchman should be dropped.

But Solskjaer believes Martial has what it takes to navigate his way through another dry spell.

“His talent will always take him through. I’ve got no doubt about that whatsoever,” Solskjaer explained. “Yes, he’s missed a couple of chances but that happens to everyone.

“It’s just being ready when the chance, for example, tomorrow comes. Just be mentally ready. Don’t be frustrated, I’ve been there myself going through patches when you don’t really score goals. He keeps practicing in training so we know how good he is and we know he will come good.”

Martial will no doubt be given a chance against Arsenal this weekend, with Solskjaer hoping his side can get back to winning ways after a disappointing defeat to Sheffield United in the week.

“We’ve got to be prepared for everything. Footballers should be aggressive, it’s a man’s game,” Solskjaer said.

“We go into this game expecting the best possible Arsenal and hopefully they’ll prepare for the worst possible Man Utd so they’re not ready for us.

“It’s always been good games, tough games. In that game [versus Sheffield United], we have to be honest to say we didn’t play well enough. It could be the same and they could man mark our players like they did in that game. It could be different tactics.

“One thing you have to do is prepare for every eventuality. Mikel [Arteta, Arsenal head coach] is one of those coaches that can change even from the starting 10 minutes.

“We’re ready. I think my team is more and more capable of – it’s maybe not the right time to say this because we lost the last game – but we’ve adapted in games better so hopefully we can adapt to this game as well.”