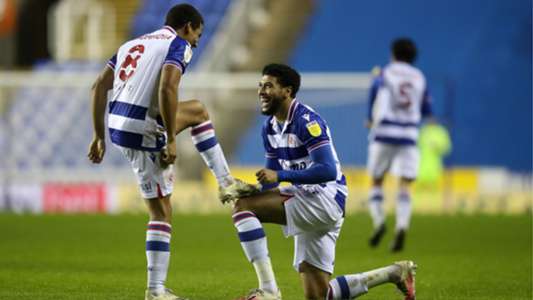 Andy Rinomhota scored his first goal of the 2020-21 English Championship campaign as Reading cruised to a 3-0 win over Coventry City.

Buoyed by their 2-1 defeat of Luton Town their last time out, Veljko Paunovic’s men made it two wins from two games at the Madejski Stadium.

Despite the Sky Blues getting off to a fine start on Tuesday evening, it was the hosts who took a 16th minute lead after a ball over the top of the visitors’ backline from John Swift was controlled by Lucas Joao before firing past goalkeeper Ben Wilson with a nice left-footed finish.

Minutes later, some magic from Ovie Ejaria almost led to a second goal, only for the woodwork to deny the midfielder. The English midfielder of Nigerian descent found his way into the box, cut back and drilled a low shot that sailed past Wilson before hitting the base of the near post.

A minute into the second-half, Rinomhota who was making his 100th appearance for the club doubled Reading’s advantage thanks to an assist from Joao. France youth international of Nigerian origin Michael Olise intercepted a Coventry pass at the back, fed Joao who in turn assisted the Zimbabwean for his first league goal since June 2020 [versus Derby County].

On appearance number 💯 for the Royals, @andyrinomhota doubles our advantage!

João cuts back from the byline – Ejaria can’t convert by Rinomhota steams onto it with his left boot and hammers in!

Perfect start to the second half…#REACOV | 2-0

The visitors’ ambition of launching a comeback was dented a massive blow owing to the dismissal of Kyle McFadzean after receiving a second caution due to a foul on Ejaria.

Swift sealed the win in the 73rd minute thanks to a superb freekick that was swept into the top right corner of Wilson’s goal.

Substitute Sam Baldock had a glorious chance to power home the fourth, scampering in behind an unkempt City backline after Dejan Tetek had won the ball from an underhit pass between defenders.

After an impressive shift, Rinomhota was replaced in the 78th minute for Baldock while Sone Aluko was brought in for Olise in the 64th minute. Guinea Bissau international Alfa Semedo was thrown into the fray by manager Paunovic in the 73rd minute but Cote d’Ivoire’s Yakou Meite and Ghana‘s Andy Yiadom were not dressed for action.

Thanks to this win, Reading now occupy the fourth position in the log after accruing 43 points from 24 games.