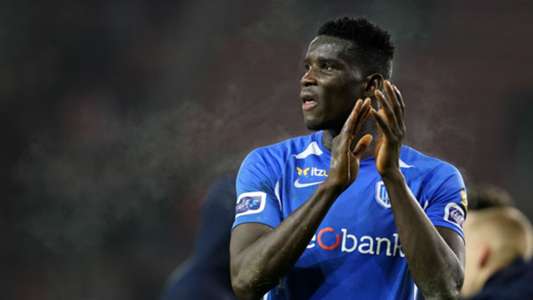 Paul Onuachu has set a new personal scoring record with his 19th league goal of the season as Genk suffered a 2-1 defeat to Kortrijk in Saturday’s Belgian First Divison A encounter.

He has surpassed his previous scoring record of 18 goals in 36 games for Midtjylland during the 2016-17 Danish Superliga campaign, after 19 league matches this season

Onuachu’s effort was not enough to help the Blue-White extend their three-game unbeaten run in the Belgian top-flight as Senegal‘s Habib Gueye scored a goal in each half of the encounter at the Guldensporen Stadion.

The Nigeria international, who scored a hat-trick against KAS Eupen on Wednesday, cancelled out Gueye’s opener in the 41st minute as both teams went into the break level but the Senegalese striker restored Kortrijk’s lead with his match-winning goal in the 54th minute.

Onuachu played the entire duration while his compatriot Cyriel Dessers came off the bench as a 60th-minute substitute for Ivory Coast‘s Eboue Kouassi.

Onuachu remains the highest scoring Nigerian player in Europe this season with 19 goals after 19 league matches and he leads the goalscorers chart in the First Division A.

Ghana‘s Eric Ocansey was in action from start to finish for Kortrijk while Gueye saw 83 minutes of action as he stretched his tally to four goals after 18 league appearances this term.

Despite the defeat, Genk remain second in the First Division A table with 38 points after 20 matches – a point behind leaders Club Brugge.

John van den Brom’s men will be targeting a return to winning ways when they visit Royal Excel Mouscron for their next league outing next Saturday.