River vs Palmeiras on US TV: How to watch and live stream CONMEBOL Copa Libertadores

River vs Palmeiras on US TV: How to watch and live stream CONMEBOL Copa Libertadores 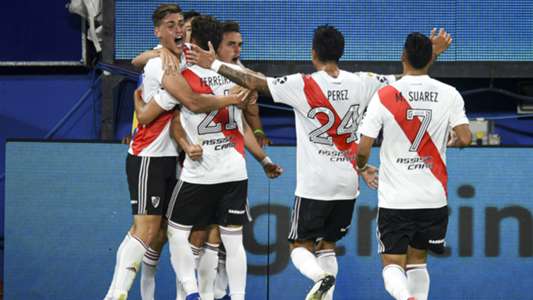 The CONMEBOL Copa Libertadores  has reached its semi-final stage, as the delayed 2020 competition nears its end.

The Millonario caused little surprise as they brushed past Nacional 8-2 on aggregate in the previous stage to book their fourth consecutive semi berth.

Palmeiras also breezed into the last four with a comprehensive win over Libertad, setting up an intriguing clash which kicks off in Avellaneda.

The CONMEBOL Copa Libertadores quarter finals can be watched through Fanatiz  with a 7-day free trial .

The streaming platform offers the option to watch each game in the US..

How to watch River vs Palmeiras on US TV

What has happened to River and Palmeiras so far in the 2020 Copa Libertadores?

River’s quest began in subdued fashion with a 3-0 defeat away to Liga de Quito in Group D, but Marcelo Gallardo’s charges quickly rediscovered their best form.

Peru‘s Binacional were thrashed 8-0 and 6-0 while the Millonario also picked up four points against a Sao Paulo team featuring Dani Alves, pushing the Brazilians into third place and the Copa Sudamericana while River qualified in first.

In the last-16 stage River dominated over Athletic Paranaense, racking up 39 shots over two legs to their opponents’ 14. Goals proved hard to come by, though, and after tying the first leg 1-1 in Coritiba a single strike from Nicolas de la Cruz saw the Argentines over the line. Uruguay‘s Nacional were then put to the sword, with River’s 2-0 home win followed by a 6-2 thrashing in Montevideo to produce an emphatic aggregate victory for the Millonario.

Palmeiras hold the distinction of being the only surviving team yet to lose a single match in this Libertadores campaign. The signs were there from the start that the Verdao would prove tough customers, as they advanced from Group B in top spot with five wins, a draw and just two goals conceded in a formidable opening to the tournament.

Ecuador‘s Delfin proved no match in the last 16, falling 3-1 at home before suffering a 5-1 thrashing to bow out of their first experience of the Copa knockout phase.

Libertad pushed the Brazilians a little harder, but still to no avail: a tough-fought 1-1 draw in Asuncion was followed by Palmeiras running riot in the second leg to win 3-0 and book only their second semi-final berth in the competition since 2001.

River chose to rest a number of key first-team players for Saturday’s Superclasico with Boca Juniors, a gamble that partially paid off as the derby finished 2-2.

The likes of Ignacio Fernandez and Matias Suarez will now return to the starting XI after featuring as substitutes at the weekend, while Milton Casco is also in line to play after a rapid return from injury.

Palmeiras have been boosted in the run-up to Tuesday’s game by the return of attacker Gabriel Veron, who had been struggling with a thigh injury.

Veron trained with his team-mates this week and is likely to start, while Ze Rafael and Gabriel Silva have also shrugged off injury to make it back into coach Abel Ferreira’s plans.

When does the 2020 Copa Libertadores finish?

The 2020 Copa Libertadores was originally scheduled to conclude with a single final in a neutral ground, the system which replaced the old format of home and away legs last year, at the end of November.

Due to the Covid-19 pandemic, however, the tournament suffered almost six months of interruption, meaning that the final phases had to be pushed back into the South American summer months of late December and January.

The last quarter-final tie between Boca Juniors and Racing Club concluded on December 23 with the former advancing to meet Santos. The first leg of that tie takes place just under 24 hours after River and Palmeiras lock horns for the first time, while both return matches take place next week.

The final proper is scheduled to be held at Rio de Janeiro’s landmark Maracana Stadium on January 30.

Watch the Copa Libertadores live on Fanatiz. Sign up for a free trial now.