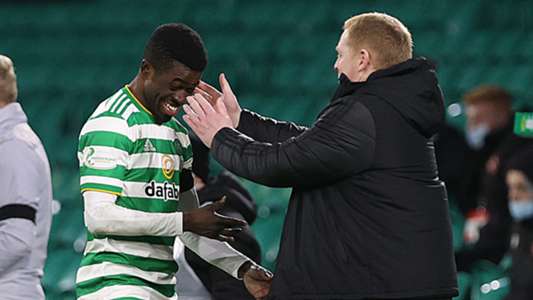 Ismaila Soro scored his first goal for Celtic in Wednesday’s 3-0 defeat of Dundee United in a Scottish Premiership encounter.

Since joining the Bhoys on a four-and-a-half-year deal from Israeli Premier League side Bnei Yehuda on January 27, 2020, the Ivorian midfielder has failed to find the net, although his first season was marred by the outbreak of Covid-19.

Against the Terrors, however, he ended his wait as Neil Lennon’s team strolled past the visitors at the Celtic Park.

With both teams playing fluid football in the opening stages, Soro gave the Hoops a 23rd minute lead courtesy of a sublime 30-yard strike after collecting a pass from Callum McGregor – with the effort sailing past goalkeeper Benjamin Siegrist.

22′ – Soro produces a wonderful finish from distance to open his #CelticFC account! The Hoops lead! 🟢

Five minutes before the half-time break, he turned provider for David Turnbull as the hosts took a two-goal advantage into the locker room.  Soro played the Scotland youth international from 30 yards from goal, moved towards the inside-right then sent a low effort past Siegrist.

15 minutes from full-time, Odsonne Edouard sealed the triumph after profiting from an assist from Leigh Griffiths. Edouard snuck in behind the Dundee’s backline and lofted a deft lob over the goalie.

After an impressive shift, the African was replaced in the 80th minute by captain Scott Brown.

Thanks to this result, the quadruple treble kings extended their winning streak to six from six across all tournaments. They are second in the log having accrued 43 points from 18 outings – 16 short of leaders Rangers who have played three games more.

Born in Yakasse-Me, Cote d’Ivoire, Soro began his career at local side Moossou before heading to Moldova’s Saxan. After impressing in the 2016-17 campaign, he was snapped up by Belarusian side Gomel before moving to Israel seven months later.

In the 2018-19 season, he played a prominent role as the Bloomfield Stadium giants defeated Maccabi Netanya on penalties at Haifa’s Sammy Ofer Stadium to emerge as champions of the Israel State Cup.

He will be aiming to add to his goal tally when Celtic visit Leon Balogun and Joe Aribo’s Rangers on January 2, 2021.