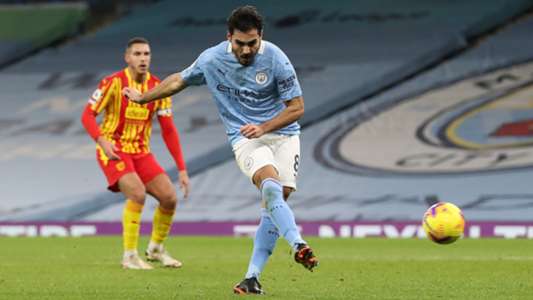 Pep Guardiola’s side failed to get all three points at home against the Baggies, who remained 19th in the table despite earning a draw

Manchester City midfielder Ilkay Gundogan has said fixture congestion is partly to blame after his side were unable to defeat relegation-threatened West Brom at home on Tuesday.

Gundogan gave his side the lead with a 30th-minute strike, but the Baggies drew level before half-time through an own goal from Ruben Dias.

Though City dominated for long stretches, they were unable to breach West Brom’s defence again and had to settle for a 1-1 draw.

It was a second straight league draw for City, who also tied local rivals Manchester United 0-0 on Saturday. With another game coming up at the weekend, Gundogan said the congested 2020-21 season is making it difficult for any European sides to put together a sustained run of form.

“It’s nearly impossible to have just one team that’s on top and dominating anything, especially with the schedule coming up,” Gundogan told BBC Sport.

“All teams in Europe are struggling to win games in a row. But we have responsibilities and we should win these kind of games, especially at home.”

Man City had 76.9 per cent of possession and could have won late if not for two massive injury-time saves from Baggies goalkeeper Sam Johnstone.

Gundogan felt that his side didn’t put in their best performance, but still could have come up with three points on a different day.

“We are human beings, not machines, we struggle as well. We know we could have played better but it feels like it was in the details today,” the Germany international added.

“We deserved better, we had the chances. I don’t know what to say, it’s disappointing to get one point, we must win these kind of games.

“It’s not always easy in this period of the year, so many games, they defend so deep. They do it well, they play with all they have, they fight for every ball. It’s not easy to create chances but we did – we just couldn’t score more than one goal.

“We have played great football in the past, we set the level high. The expectation is not going down just up. When you win you need to prove yourselves again. You can see all over Europe the big teams are struggling. It is not going to get easier in the next few weeks.”