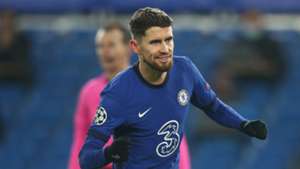 Chelsea ended their Champions League Group E campaign with a 1-1 draw against Krasnodar thanks to Jorginho’s penalty equaliser.

Jorginho scored from the penalty spot as Chelsea came from behind to draw 1-1 with Krasnodar in their final match of the Champions League group stage on Tuesday.

Frank Lampard’s side had already qualified for the knockout phase as winners of Group E and marginally had the better of a low-key fixture at Stamford Bridge.

Remy Cabella put Krasnodar ahead with a crisp low finish before Jorginho equalised from the penalty spot a few minutes later.

Tammy Abraham twice went close for Chelsea in open play but despite his tireless efforts up front the Blues could not find a winner.

Krasnodar began brightly with Tonny Vilhena’s swerving half-volley whistling just over the crossbar and Viktor Claesson striking a shot just past the post from a good position.

The visitors deservedly took the lead after some slick build-up play which culminated in Cristian Ramirez’s cutback for Claesson, who fed it to Cabella and the former Newcastle United man arrowed it into the bottom-left corner.

Chelsea got themselves back on terms shortly afterwards when Abraham was impeded by Brazilian defender Kaio as he attempted to turn inside the penalty area.

Jorginho placed the penalty into the corner of the net, deceiving Krasnodar goalkeeper Evgeni Gorodov with his trademark hop-then-shoot spot-kick style.

10 – Chelsea have won 10 penalties in all competitions this season, more than any other Premier League side, scoring eight of them (level with Leicester). Hop. pic.twitter.com/vyLw054ypF

The penalty was Chelsea’s 10th in all competitions this season, which is more than any other Premier League side, having successfully converted eight of them (level with Leicester City).

Abraham skipped clear of the Krasnodar defence just before the half-hour after being found by Kai Havertz, but he could only strike his shot wide of the post.

Chelsea looked the more threatening after half-time as Lampard’s side played with greater tempo, although it did not translate to clear goalscoring chances.

Abraham pinched the ball off Ramirez inside the box but Gorodov improvised with his heel to keep out the Chelsea striker’s low shot.

Timo Werner upped the energy levels when he came on as a 74th-minute substitute for the ineffectual Havertz, and the German struck a low angled shot just beyond the far post.

But that was as close as Chelsea went in the closing stages as the match petered out.

What does it mean? Chelsea miss out on CL landmark

Victory for Chelsea would have given them their highest ever points total in a single Champions League group stage (16), but they fell short of the milestone.

Lampard also gave some of his squad players a run out as he made 10 changes from Saturday’s win over Leeds United, but only a few of his second-string players caught the eye during a subdued game with nothing at stake.

Energy and ambition from Abraham

The striker has had fewer opportunities since Chelsea splashed the cash on expensive attacking options in the last transfer window, but Abraham rolled his sleeves up and put himself about against the Russian outfit.

Abraham attempted five shots – more than any other player on the pitch – and had 10 touches inside the box as he held the ball up, tried to provide a goalscoring threat and won the penalty for Chelsea’s equaliser.

No clean sheet for Kepa

Kepa Arrizabalaga, the world’s most expensive goalkeeper, made his first Champions League start of the season having lost the number spot to Edouard Mendy following his arrival in September.

There was little he could have done for Krasnodar’s goal, and he was generally solid, but with seven goals conceded in four appearances this term he has still let in as many as Mendy and Willy Caballero have in 15 matches combined for the Blues.

7 – Kepa Arrizabalaga has conceded seven goals in his four appearances for Chelsea this season in all competitions, as many as Édouard Mendy and Willy Caballero have shipped in their 15 games combined in 2020-21 (7). Leaky. pic.twitter.com/tyh7GM6GZE

Chelsea come up against former manager Carlo Ancelotti on Saturday when they face Everton at Goodison Park. Krasnodar host Lokomotiv Moscow in the Russian Premier League on Sunday.