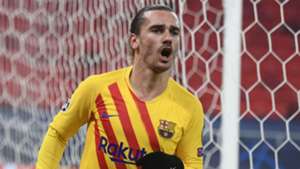 Antoine Griezmann continued his recent goalscoring form as Barcelona eased to a comfortable 3-0 victory over Ferencvaros in Champions League Group G on Wednesday.

France striker Griezmann struck early on as he netted in three consecutive games for the first time in a Barca shirt.

Martin Braithwaite and Ousmane Dembele were also on the scoresheet for Barcelona, who had already qualified for the competition’s knockout phase.

The victory also ensured Barca won their first five Champions League group stage games for the first time since the 2002-03 campaign and they lead second-placed Juventus by three points with one match remaining.

Lionel Messi was rested by Barcelona coach Ronald Koeman for the trip to Hungary but without the influential Argentina international his side played some superb football.

Koeman’s side increased their advantage moments later when Dembele unlocked the Ferencvaros defence with a jinking run before his cross was met by the sliding boot of Braithwaite to complete a 33-pass move.

33 – Martin Braithwaite’s goal for @FCBarcelona against Ferencvárosi TC is the longest pass sequence of any @ChampionsLeague goal this season with a total of 33 passes. Overwhelming. pic.twitter.com/TEDPpNwf1O

The lively Braithwaite then won a penalty just before the half-hour after he went down following a slightly mistimed tackle by Abraham Frimpong.

Braithwaite tamely shot wide from a good position before the half-time break before Barcelona started to take things easy in the second half.

Dembele burst into life when he rampaged forward on a fine solo run, only to see his shot fly into the side netting.

The France forward carried Barca’s main threat in the remainder of the contest and twice brought smart saves out of Dibusz late in the game, in a stylish win.

What does it mean? No Messi, no problem

The Blaugrana have now won nine of their past 10 Champions League games without Messi, drawing one, since a 2-1 defeat to Ajax in November 2013.

Their form in LaLiga is still inconsistent but, in Europe at least, Koeman’s side look like one of the teams to beat, even without their talisman.

Braithwaite scored twice on his first Champions League start for Barcelona against Dynamo Kiev on matchday four, and he followed it up with another goal against Ferencvaros.

As a result, the Denmark striker became the first player to score on their first two starts in the competition for Barca since David Villa in 2010. After just one goal in his first 17 appearances for the club he also now has four in his past three.

Ferencvaros rarely put Barcelona goalkeeper Neto’s goal under threat although but they did muster two attempts on target, the best of which fell to substitute Roko Baturina.

A superb cross from Gergo Lovrencsics picked out the unmarked Baturina inside the six-yard box, but the striker failed to generate enough with his header from a great position. The embarrassed Croatian immediately put his head in his hands.

Barcelona are back in LaLiga action on Saturday with an away fixture against Cadiz while Ferencvaros head to Diosgyor in Hungary’s top flight.