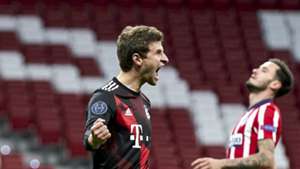 Atletico Madrid‘s hopes of qualifying from their Champions League group will go down to the final matchday after Thomas Muller scored an 86th-minute penalty to earn a weakened Bayern Munich a 1-1 draw at the Wanda Metropolitano.

Bayern had won their previous 15 games in UEFA’s flagship competition but were already assured of top spot in Group A and left the likes of Robert Lewandowski and Manuel Neuer out of their travelling squad.

With Lokomotiv Moscow losing 3-1 at home to Salzburg earlier on Tuesday, victory for Atleti would make certain of second place with a game to spare, an aim they were on course to achieve thanks to Joao Felix’s eighth goal in 14 appearances this season.

The Portugal international converted from a Marcos Llorente cutback after 26 minutes, but Felipe – brought on for the injured Jose Gimenez – felled Muller in the box and his fellow substitute converted from 12 yards.

Atleti must now avoid defeat away at Salzburg next week to join Bayern, unbeaten in 14 games in all competitions after Muller’s late goal, in the last 16.

FT at the Wanda @Metropolitano as the game ultimately ends in a draw.