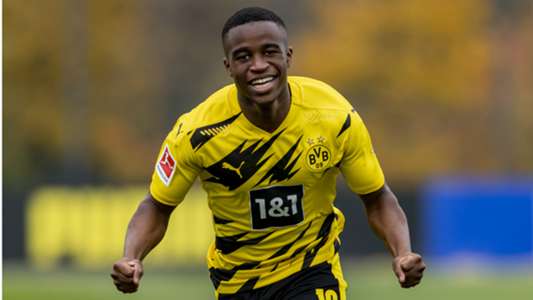 Youssoufa Moukoko has insisted he will chase his dream “like a lion,” after becoming the youngest player in Bundesliga history.

Moukoko wrote himself into the history books on Saturday when climbing off the bench to make his Bundesliga debut during Borussia Dortmund’s 5-2 win at Hertha Berlin.

Moukoko was 16 years and one day old when entering the field of play in the 85th minute, breaking the previous record held by Nuri Sahin, who was 16 years and 334 days old when he made his debut for Dortmund against Nurnberg in 2005.

The teenager has been on the radar for a number of years. He played for the Bundesliga’s Under-17 side at the age of 13, and once scored six goals in a game at the age of 14.

“I can’t do anything about being good at football,” he said in an interview with DAZN. “The one who works harder gets rewarded in the end.

“It was always my dream to become a professional football player. And if you have that dream you have to chase it like a lion.”

Giovanni Reyna is another youngster on the rise at BVB, and Moukoko says he has forged an excellent understanding with the American.

Reyna is two years older than Moukoko, and while the pair had trouble communicating off the pitch – it appears there is an on-field chemistry.

“We never talked because he did not speak German and I had my difficulties with English,” Moukoko said of his relationship with Reyna. “But on the pitch, we understood each other. It was unbelievable.”

Having made his Bundesliga bow at the weekend, the focus has shifted to whether Moukoko will be handed a Champions League debut.

Dortmund entertain Belgian side Club Brugge on Tuesday and BvB coach Lucien Favre has a decision to make on whether to include Moukoko in his plans.

Should Moukoko get on the pitch, he would become the youngest player in Champions League history. That record is currently held by Celestine Babayaro who was 16 years and 87 days old when he played for Anderlecht in 1994.

The German side occupy top spot in Group F through three games.