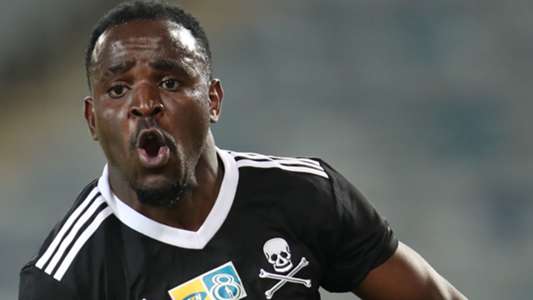 Orlando Pirates head coach Josef Zinnbauer is optimistic the club’s leading goalscorer Gabadinho Mhango will soon be back in action.

Mhango has missed the Buccaneers’ last four matches after picking up a groin injury in the match against Stellenbosch FC at the end of October.

It also ruled him out of recent Africa Cup of Nations qualifying games for his national team Malawi.

In his absence, Pirates have however won all four matches, including Saturday night’s 2-1 win over SuperSport United at the Orlando Stadium.

Speaking after the match, Zinnbauer provided an update on Mhango’s fitness status.

Zinnbauer was referring to Pirates’ next match, against Baroka FC next Saturday afternoon, 28 November, at their home base in Soweto.

There was also some more good news for Bucs supporters regarding the return from injury of Bongani Sam. There is still a debut in the pipeline for the club’s newly signed Democratic Republic of the Congo striker Jean-Marc Makusu.

“He’s (Mhango) is not the only player,” Zinnbauer said, “we have Sam coming back, with Jean-Marc we have a new player. We have other players injured who are coming back closer to full conditioning. Maybe in a week, we have all players available, I hope.”

Another player who has just returned from injury, Tshegofatso Mabasa, came off the bench to get the winner for Pirates against SuperSport after Zakhele Lepasa had earlier equalised via the penalty spot.

The one player who will be out for a while longer is Thembinkosi Lorch – Pirates confirmed earlier this week that he would be out for around five weeks.