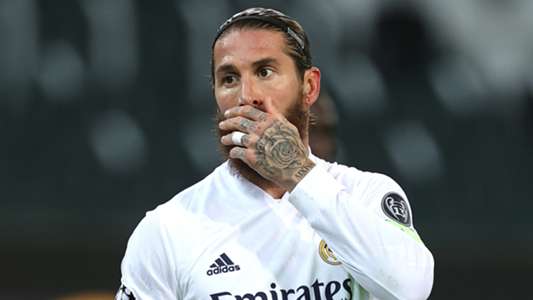 The 34-year-old went off before half-time of his country’s Nations League game, with Madrid facing some important fixtures in the coming weeks

Real Madrid have been dealt a potential injury blow as Sergio Ramos walked out of Spain’s Nations League clash with Germany on Tuesday.

The defender went off before half-time and appeared to gesture to the back of his right thigh as he reached the touchline.

Spain were already 3-0 up when Ramos went off after goals from Alvaro Morata, Ferran Torres and Rodri.

Madrid boss Zinedine Zidane will be hoping Ramos’ withdrawal was precautionary with his team enjoying a healthy lead, as the Spanish champions have a number of important fixtures coming up.

They return from the international break with a trip to second-placed Villarreal on Saturday, knowing a win could take them to within a point of early leaders Real Sociedad at the top of the table.

League clashes with Deportivo Alaves and Sevilla are also coming up, while Madrid have work to do in the Champions League.

At the halfway point of the group stage, they are third in Group B, though only a point behind leaders Borussia Monchengladbach. Madrid play Inter and Shakhtar Donetsk away from home before finishing the group stage against Gladbach at their temporary European home, the Estadio Alfredo Di Stefano.

Immediately after that game is a derby clash with Atletico Madrid.

Ramos has been in the headlines in recent weeks, with some personal milestones reached and plenty of paper talk about his future at Madrid.

He recently scored his 100th goal for Real Madrid, before becoming the most-capped player in European international history as he passed the benchmark previously set by Gianluigi Buffon.

There has also been speculation that Ramos’ time at Madrid could be coming to an end. Paris Saint-Germain have been linked with a move but Goal understands PSG’s priority is to tie down star duo Neymar and Kylian Mbappe to new contracts.

Ramos is out of contract at the end of the season but Zidane has said he has no doubt the defender will sign a new deal at the Santiago Bernabeu.

“I have no doubt that he will stay,” Zidane said in a press conference. “He is our leader and of course we love him forever.”