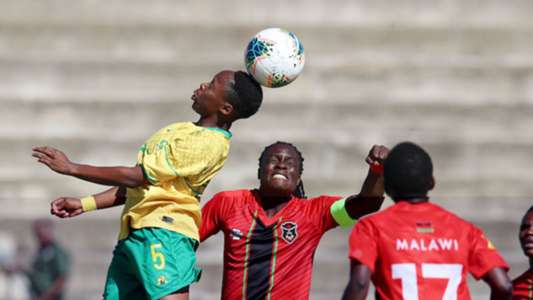 South Africa booked a place in the final of the 2020 Cosafa Women’s Cup after defeating 10-women Malawi 6-2 in Thursday’s semi-final encounter.

Banyana Banyana recorded a clinical winning run despite the absence of foreign stars, starting with a 2-0 triumph over Angola before 5-0 and 7-0 wins over Eswatini and Comoros respectively.

Having advanced as Group A winners, Desiree Ellis’ team aimed to avoid a defeat in the quest to defend their title against Malawi.

On their part, the Scorchers emerged as Group B winners following clinical 9-0 and 1-0 victories over Lesotho and Zambia respectively.

The Malawians were reduced to 10 players after goalkeeper Samir Amido was handed her marching orders for a poor challenge 20 minutes into the encounter but the first half ended in a stalemate.

After the restart, Banyana came alive as Nomvula Kgoale broke the deadlock six minutes into the second half to put the hosts ahead.

Malawi, however, got a swift response two minutes later when Temwa Chawinga fired in a stunner from outside the area.

With their lead cancelled, Hildah Magaia recovered the advantage for South Africa in the 62nd minute before Kgoale bagged her brace of the match to extend the lead two minutes later.

Banyana continued to profit from their numerical advantage as Magaia hit her second and Banyana’s fourth in the 68th minute before Sibulele Holweni got on the scoresheet six minutes later.

15 minutes from time, Magaia netted her treble and Banyana’s sixth as Tabitha Chawinga’s late effort three minutes later only counted as a consolation goal for the Malawians.

Having advanced, Banyana Banyana will go up against final debutants Botswana in the final on Saturday and will seek to avenge their 2020 Olympic Qualifying elimination against the Mares.